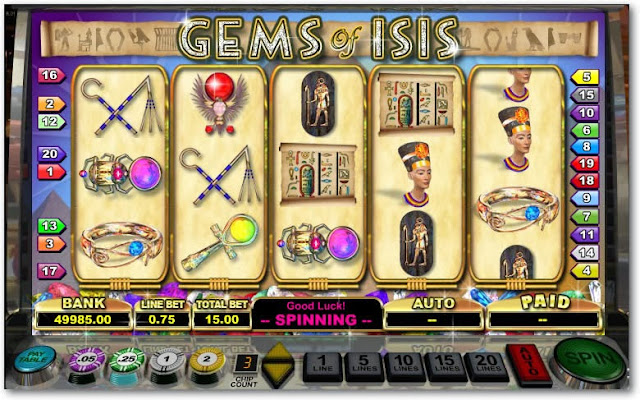 In an earlier post, I mentioned how a true variable RTP in a game is based on the mechanics of the game, not an artificial variable that does nothing but affect the RTP. A true variable RTP is blackjack, where player choices affect the cards in the shoe that the dealer can then draw from. This puts restrictions on how a game plays. If there are no restrictions, it boils down to a player going to a casino, giving the casino money, and then asking if they will get any money back. The casino then decides, arbitrarily, whether that will happen.

Online casinos don't want you to think that way, though, regardless of the reality. They rely on our cultural history with physical casinos to provide people with a context through which they will view games. Physical casinos were, and mostly still are, restricted by mechanical processes. There is no easy way to dynamically alter the payout of a card game or mechanical slot. And any process by which that happens is almost universally accepted as cheating. If a casino slips cards into and out of a deck secretly, that's cheating.

That is why genuine representation of game parts is important. It's why most regulatory jurisdictions require that a game virtually represent actual game parts. If there are cards on screen, those cards must come from a virtual deck, with a set number of cards in them. Everyone is coming into online casinos with assumptions created by physical games. Artificial, or arbitrary is perhaps a better term, RTPs have no such restriction. They are a breeding ground for corruption.

An artificial RTP is like a slot that increases the RTP the longer you play. This could be changed in any number of ways, such as the addition or subtraction of symbols, changes to the pay table, or bonus games that provide guaranteed wins. When a casino tells you about this, they are not technically being dishonest. They are obfuscating the game's nature, though, and I have a problem with this.

The more that a casino plays around with the RTP, the less that one can easily understand his or her chances. This is bad. Casinos will, and do, take advantage of this situation to provide poor returns, while hiding those poor returns behind abstruse mathematics. Furthermore, it makes casinos think that they don't even need to be honest. If there is no inherent reality understood to be operating behind the games, casinos can do whatever they damn well please.

The recent Spielo/G2/Gtech/Betfred blow-up that played out on Casinomeister earlier last year revealed casinos doing just that, using the excuse that having cards does not mean that they are cards. The visual appearance of the game and the game itself have no connection. Obviously, this was cheating because they lied about the nature of the games and went to great pains to keep those lies hidden, because again, they don't want players understanding how their proverbial sausage is made.

And even if they hadn't lied, it was still bad. As I mentioned above, casinos rely on people entering the casino with preexisting ideas about how casino games work. Cards are cards. Slots are slots. Dice are dice. People assume that the games work a particular way. Having a game behave in a different way is inherently dishonest.

This sort of trickery is not restricted to online casinos, though. Many casinos operate with games that appear to be slots or video poker but are, in fact, Video Lottery Terminals. As far as the user is concerned, there's little visible difference, but there is no virtual machine taking place. It is the casino arbitrarily deciding "yes, you will receive money."

This is an incredibly obtuse distinction, so I hope I can make it clear.

Video Lottery Terminals, or VLTs, are a form of fixed odds betting. This is, as you could guess from the name, similar to a lottery ticket, where the company issuing the tickets knows precisely how many people are going to win what. There is no chance involved. It is all planned.

There is actually a way to "scam" these machines. Since a... seasoned?... Can anyone actually be seasoned with this sort of thing? Regardless, since a seasoned player knows how these machines work, he or she can camp out by a stand-alone machine and wait for a person to lose a bunch of money. They then know that the machine will need to pay something out soon to make its fixed odds.

The machine needs to be a stand-alone system, since most large operations link all of their machines together to maintain a house RTP as opposed to a per-terminal RTP. A camper would need to somehow camp out an entire casino floor.

Since things are very similar from the player perspective, why am I upset?

First, this is a semi-moral issue for me. Casinos are parasites. They are shiny and have lots of cool stuff, but at their core, they are parasites. They provide no value to society and yet generate truly garagantuan profits. One of the "payments" that casinos must make to be morally allowed into this position is that they are prisoners of their mathematics. Sometimes, a casino will lose money at the end of the month. That is simply going to happen.

If a casino is loaded with VLTs, they always know how much they will have. They will never lose money. They will always, forever, have a percentage of money at the end of the month. Many online casinos try to argue that their slots are real slots while actually running rigged games that effectively turn the slot into a VLT.

Second, the differences to the player can actually be massive from the perspective of an omniscient third party. For example, let's say that you go into a casino that runs slots with virtual reels spinning. You could pull the lever and net three sevens immediately. There is a non-zero chance of that happening, and that will happen now and then. That's how casinos can lose big over a month. One person wanders in, hits it big, then leaves, never to return.

But if that casino is running VLTs, until you lose some money or until someone else loses some money, that "slot" machine will never pay out. The chances of you pulling three sevens is zero. So while the player may be none the wiser, the players as a collective are worse off.

Another way is to look at lottery tickets. Since all winners and losers are pre-determined, if someone buys the grand prize ticket on day one, there is zero chance that you could win that grand prize until all of the tickets are sold and a new run is printed. For a true slot machine, five players could win grand prizes in a row. The chances of this are low, but it could happen.

For most physical casinos in legitimate jurisdictions, if the game is a VLT, that must be said somewhere on the machine. That's why "Fruities" in the United Kingdom are commonly known as FOBTs, or Fixed Odds Betting Terminals. Everyone knows how they work. Nothing is hidden. 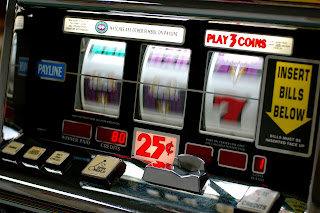 To me, though, that doesn't change anything from a moral perspective. Casinos should be able to lose money. They must feel risk. I don't have enough room or data to go into this fully, but the UK again provides a good example. FOBTs are propagating across the island like a bacteria. This would not be happening if there was a chance of losing money. This is happening purely because they are money-printing machines. A no-risk parasite, increasing in size and reach, as it feeds off of the population.

Or for a historical example, let's look at Las Vegas in the early days. Back then, everyone had slot machines. Gas stations, soda fountains, libraries: slot machines were, again, propagating across the state like a bacteria. They were, of course, all rigged. The mob was good at that. And by rigged, I mean that they never lost money at the end of the month. They always made money... just like FOBTs. And just like online casinos, people assumed they knew how the game functioned when they made a bet.

Once that rigging, once that guarantee, was gone, so too went all of the slot machines. Money-printing machines with no risk produce a surfeit of those machines, and in the case of gambling, place an unnatural strain on society. Taking part in the economy needs to involve risk, otherwise a pure parasite is formed.

So, in that roundabout way, I hope that I have explained why having games that represent some virtual mechanism are so important. Only through the guarantees of the math is risk created. Only through the protection of the math does the player stand a real chance.
Posted byBlack Jackat1:21 PM

Email ThisBlogThis!Share to TwitterShare to FacebookShare to Pinterest
Labels:games,probability,RTP,slots