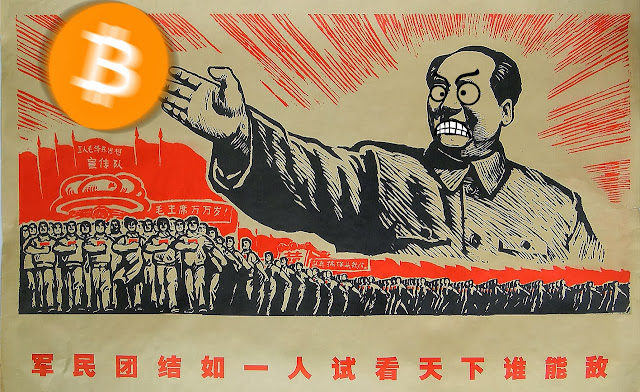 As I mentioned in my earlier article, the Internet has changed a large number of things. For the purposes of this discussion, it has changed the nature of borders and the nature of systemic control. To wit, it has weakened them — substantially in many ways Now, let's think about this for a moment; who would be most threatened by a loss of border and systemic control?

The first volleys in this Quixotic war were thrown by totalitarian governments many years ago after the rise of wireless radio communication. Those same governments then followed that up with things like China's Great Firewall. But for the Western World, the most visible example of this behavior is without doubt the UIGEA. With that, the United States tried to clamp down on the system through which money flowed.

Bitcoin has invalidated that power. When money is an abstract mathematical construct that exists without regards to borders and systems, boom, there goes governmental power. In my earlier article I said,

"Governments will of course fight this development. They will tilt against the windmill until their efforts just disintegrate entirely. They will ignore the writing on the proverbial wall for years, perhaps decades, as they puff up their chests in the face of an enemy that they don't understand. It is contemptible, really."

I like to be correct, but rarely am I correct just a week later.

Oh, they are of course couching this in the excuse of protection and whatnot, which is total horseshit. I'm not even sure why China bothers saying it. Everyone out here knows that it is a lie, and everyone in China knows that it is a lie. So why lie? I dunno'. Perhaps it makes them feel better about it or something.

One statement that Chinese authorities made was of special interest to me.

The notice said that Bitcoin was “not a currency in the real meaning of the word” but was rather a “virtual commodity that does not share the same legal status of a currency. Nor can, or should, it be circulated or used in the marketplace as a currency.”

Not only does this ignore that all major nations rely on what's called Fiat Currency and as such no currency is truly "legitimate" in the sense that it is backed by anything other than a system as equally ephemeral as Bitcoin, it also uses all of those principles that we were previously discussing! They call it a "virtual" commodity, implying that unless money is physically printed, by a government of course, it's not real. They then say that it does not share the same legal status! Laws?! That's the point of all this! To side-step laws!

Laws exist only when borders exist. And as I mentioned, borders are much weaker now than they were.

There are two causes for real concern in all this. First is the possible use of this borderless money in illegal activities. That is indeed a problem. But just as the truth will set you free, the loss of lie can imprison you. Many laws are lies, predicated on dogma, fear, and ignorance. The loss of control forces a government to face its bad laws.

Second is that a financial system that is by its very nature unregulated will be an unstable financial system. That's why every major nation has things like FOREX, commodity, and equity laws. And if Bitcoin becomes widely accepted, a Bitcoin boom and bust could take many countries with it.

But regardless of these concerns, this is the reality. Our society and our legal structures have many things that are wrong with them, and the only reason why we have not been hitherto forced to make changes is because the old systems of control allowed society to stumble along like some drunk.

We are losing control, meaning that society can no longer stumble along. We need to fix our problems, otherwise these unstoppable social and technological changes will cause the destabilization of our entire, God-forsaken edifice. While that sounds exciting, it's certainly something that we do not want.

It is time for our politicians to stop being so goddamned stupid, stand up, educate themselves, understand the way the world is and where it is going, and pass good laws. No longer can they be utterly beholden to special interests and blind, dogmatic beliefs. Every party, every politician, and every nation is guilty of these activities in some way. It is truly bipartisan and global.

The Internet is here. The world is one. Deal with it.
Posted byBlack Jackat11:42 AM

Email ThisBlogThis!Share to TwitterShare to FacebookShare to Pinterest
Labels:business,free trade,laws